Have you heard about the new kid on the block? 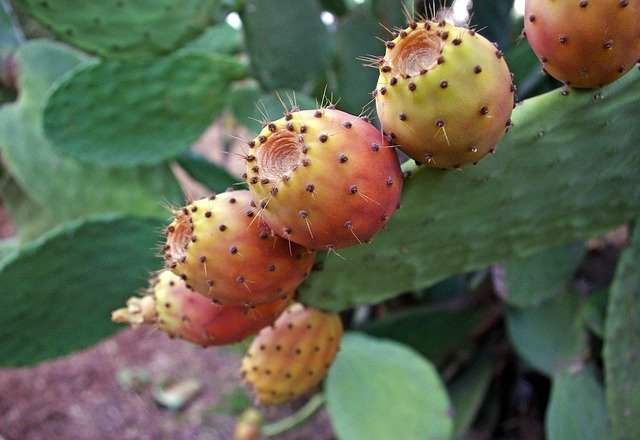 Prickly Pear Oil – (Opuntia Ficus Indica) also known as Barbary Fig oil, is grown in many of the hot, dry climate countries such as Morocco, Tunisia, Madagascar and India.

If you’ve been to any of those countries, you’ll have probably seen Cacti growing on the side of the road and the fruit of the cacti (which looks like a pear) can be eaten and made into juice.

However, the seeds of the Prickly Pear fruit, can be made into an oil – I call it liquid gold, it has a golden tinge and has a slight earthy, nutty scent but it contains magic for your skin and the benefits outweigh the scent!

You’ve probably heard of Argan oil and its huge benefits, but Prickly Pear Oil outranks it, in terms of benefits.

It has a high content of essential fatty acids, (88%) which can help calm down inflammation and redness.  It’s easily absorbed and doesn’t leave a greasy residue or smell.

It contains antioxidants known as betalains, which come from the yellow and red pigments found in the plant. It contains the highest amount of betalains than any other plant.  And this substance helps reduce wrinkles.

The seed contains amino acids, which may help produce collagen production and the oil keeps the collagen layer of your skin moist and healthy.

It has a concentrated blend of Omegas 6 and 9 which helps to restore skin elasticity and soothes inflammation.

It also contains Vitamin K, which can help in brightening age spots and uneven skin tone.

Prickly Pear oil contains the most Vitamin E on the market (150% more than Argan Oil) and the highest percentage (88%) of unsaturated fatty acids compared to other oils.

Pure Prickly pear oil has a light and silky texture it is the epitome of a luxurious oil in every way, which is why I call it “liquid gold”.

Our Prickly Pear Oil comes from Tunisia and is certified as organic.

How can I try it?

It’s available from my website in a 30ml bottle

This site uses Akismet to reduce spam. Learn how your comment data is processed.